Stock Market Technical Analysis: The Coppock Indicator or Coppock Curve was developed by Edwin S. Coppock who was an economist. His inspiration for the indicator was unusual because he proposed that stock market down turns were like a bereavement that required a period of mourning. According to bishops of the Episcopal Church to whom he was giving investment advice, the average period of mourning following a bereavement was 11 to 14 months. Coppock reckoned that this time period would be of importance in the length of downturns.

A move of the oscillator above the 0 line into positive territory is interpreted as a buy signal. A move below the 0 line into negative territory is interpreted as a sell signal. Some investors would go long when the line turns up from a trough below the 0 line rather than waiting for it to cross the 0 line. Furthermore, many investors would ignore the sell signal when it crosses below the 0 line. This is because Coppock designed it to identify those relatively seldom periods when it the optimum time to invest in stocks for the long term – that is after a crash or the end of a bear market. It is not a predictor of the market bottom but signals the relatively early stage of a subsequent rise in prices.

The accompanying chart shows the Coppock indicator for the S&P500 from mid-2007 to 2012.  In this case it was very successful as it turned up after the major multi-annual low in March 2009 during the financial crisis. A long term investor who invested in stocks when the Coppock indicator reversed would be very happy as the market rallied for a number of years afterwards. 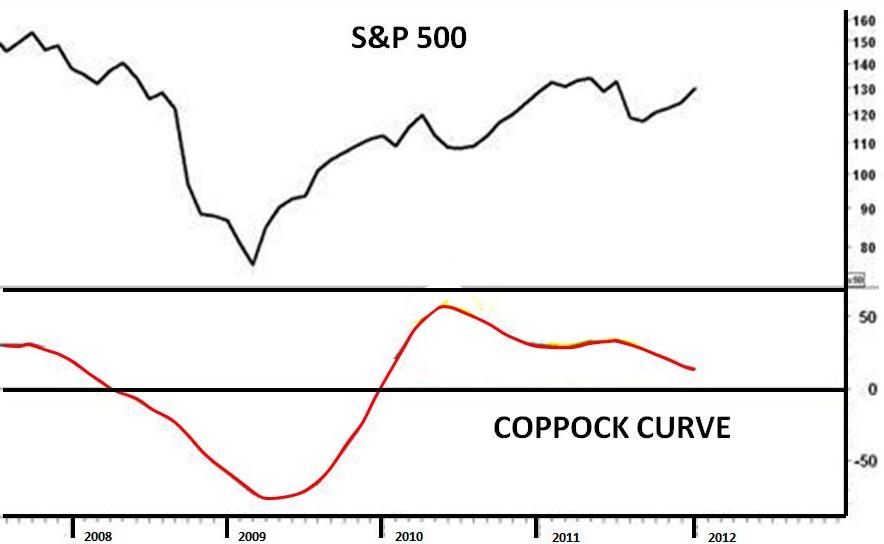